The Training As a coach and also an athlete, I first try out all my training plans to ensure that they work! A plan needs to have a build phase, a race specific phase and a suitable taper for the event in mind. This also needs to take into cognisance life as we are not pro athletes and as age groupers have to balace work, family and social life as well as train for an even or a goal.

The goal for this race was a sub 3:15hr and to improve on a current personal best of 3:24hr. Something that would take work, considering am 56 years old and have not raced for almost 20 months because of Covid19 restrictions. Add to that having also recovered from getting Covid19 in June 2021.

Training and Racing was by power rather than heart rate or pace. As a STRYD certified coach the plan was deemed the best possible to achieve the goal, by having the high volume running required as well as the necessary marathon pace workouts to achieve racing pace as there had been no racing for the last 20 months. The plan also need some adaptation for my age so that there was enough recovery and also to take into account cross training of cycling and swimming as am still a competing triathlete and needed to keep a level of fitness in the other disciplines. This adaptation culminated in running 6 days a week so that could still do a long cycle on the Saturday and some of the steady paced runs changed to endurance to allow for a better recovery needed due to age.

STRYD POWER CENTRE Based on an accurate critical power having done the training volume and mixed intensities and generally hit the targets and undertaken a Critical Power 3/10 test 10 days before the race so a very accurate CP of 280W was established. STRYD Power Centre gave a predicition of 3:18:30 +/- 3:58minutes with a race CP of 264W.

Coach Calculations: Based on personal analysis of training runs at marathon pace and just below marathon pace, my own calculator was used to verify, especially as many training runs were done in specific shoes in the rotation and I would be racing in Nike Next 2 %. The are many discussions on the various forums about calibration factors that need to be applied to STRYD power especially for carbon plated race shoes. Personally I run in the various shoes in my rotation and over time can get an accurate factor for each type of shoe, based on my running and efficiency. Hence the Shoe Factor component in the spreadheet cacluations. For information Carbon race shoes 1.04, Tempo Shoes 1.06, long run every day shoes 1.09. The alternative is to change the STRYD Calibration depending on shoes, which I prefer to leave as 100 and instead use a factor in my race calculations.

This being an all out PB effort a CP of 94% was chosen being above the top end of the normal range (88%-93%) applied to the critical power for a full marathon as the aim to achieve this PB and knowing that I had previously run this marathon with a CP of 94%. I knew it was achievable especially as I train at 1450m and would be racing at 30m altitude.

A distance of 42.4km was uses being slightly higher than marathon distance as with weaving past runners and not always being able to stay on the shortest route, there is always some over run, so this was taken into consideration. To keep in with the STRYD predcition of 264W for comparison and this figure tied in with my own %CP calculations, so this was used with a known shoe factor for the Next 2% of 1.04.

Calculated Race time of 03:14:52, give or take being the predicition.

Race Strategy: The aim as with marathons is to start slow and build into it, getting up to race pace before giving everything at the end and running on heart, adrenaline and determination. Read more on pacing this format with the 10/10/10 Method

Actual Strategy: Knowing the course, most of the hills are done early on with only rolling hills until a small kicker late on, so the plan was to ease into the race for the first 6kms, then run with a good rythym for the next 25km at race pace and see what was left for the last 11-12kms as this was a PB attempt therefore to give it everything and if needs be hang on!!

Analysis: Training went pretty much according to plan and adaptation was good with a fair balance between high intensity sessions and low recovery or easy runs and bigger mileage. At the start of the race The fitness and fatigue numbers were:

Take into account the figures above also included cycling and swimming training which continued throughout the 16 week training plan.

Target power for racing was achieved at an overall average power of 264W, with a finish time of 3:14:36 which is pretty much as calculated by myself. For those that run with STRYD, raced at 94% CP and an RE 0.96.

Otherwise the race pacing was good, the pre race analysis was accurate base on the understanding of the training results and the race strategy from experience of running this race previously ensured that a strong finish achieved a PB!!

There are many benefits to training and racing with a STRYD Power Meter and as a coach I can show the merits of using one as I develop my plans accordingly for any distance and what better proof that a coach who tries and tests all his plans. If you would like to find out more about running to power, get in touch.

For more info on my STRYD Power Meter Training Plans 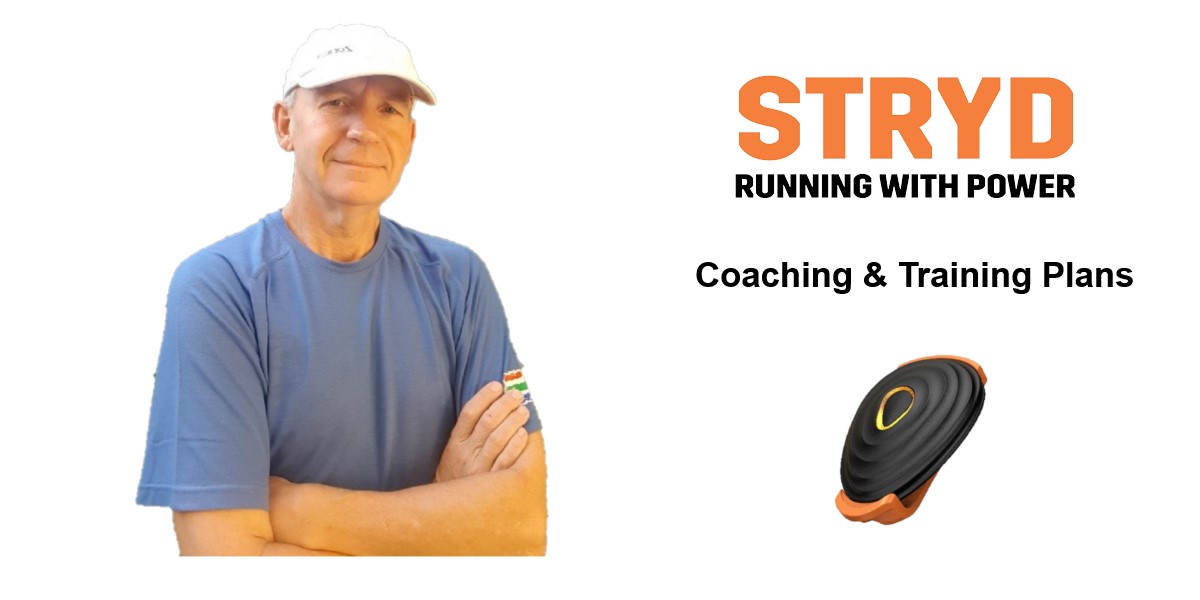 A team dedicated to Triathletes, Runners and Cyclists

For more information on training plans and coaching